Insulin resistance is not just one level and one thing 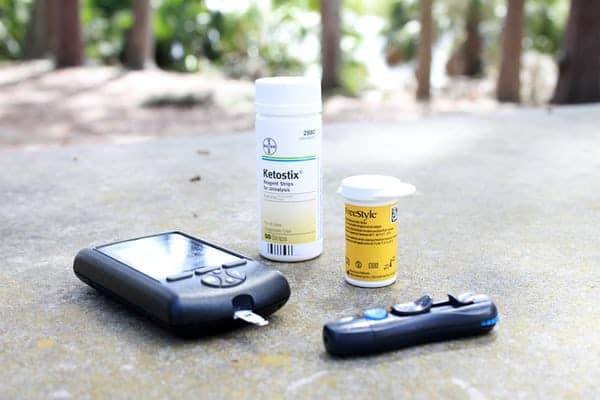 Insulin resistance is a very complicated and intriguing scenario.

Insulin resistance is where the body is not at a healthy metabolic level and you can gain weight very easily and quickly, or find it harder to lose weight.

This health and metabolic concern is spoken of a lot, however you need to understand there are many areas of the body that can be affected by insulin resistance, and depending on what area of your body that is affected, it could be one, two or many, each area has a the ways to handle this will be different for each concern.

Let me explain more of what I have learnt from Dr Jade Teta.

How our body operates when we are insulin sensitive (meaning we are in good metabolic working order).

At the level of the Liver:

When you are insulin sensitive, the normal response is to send signals to the liver to stop making glucose, so shuts off gluconeogenesis (making on new glucose). It says stop making any of your own sugar – we have plenty.
The liver doesn’t make sugar – it uses the sugar you just ate.

It also tells the liver to increase it’s storage of sugar (it tells the liver it’s got plenty of sugar around why don’t you increase the amount that you store away) – known as glycogen synthesis.
In the liver the insulin normally will say “hey stop making sugar and start storing sugar”.

At the level of the Muscle:

When you are insulin sensitive – insulin says hey muscle here is some glucose, take in this sugar, use this sugar – protein and fat too. Here is glucose for energy – use it!
The muscle will use it immediately or it will store it away as muscle glycogen and it will store some of that glucose as well.

At the level of the Brain:

When you are insulin sensitive – insulin will tell the brain hey we’ve just eaten and got plenty of fuel stop being so hungry.
When you’re sensitive to insulin – insulin is a hunger suppressor.

This is why you don’t want zero insulin, because that will make you hungry all the time – so if insulin shuts down hunger under it’s normal reaction.

At the level of the Fat cell:

When you are sensitive to insulin, the insulin basically tells the fat – hey fat, open up your doors, take in this fat and decrease the release of any fat.
Fat cells you must store any extra fat for later.

This is where people have used the analogy of insulin as a storage and locking hormone as it relates to fat – because as a natural insulin sensitive fat cell will take in fat and not release fat. 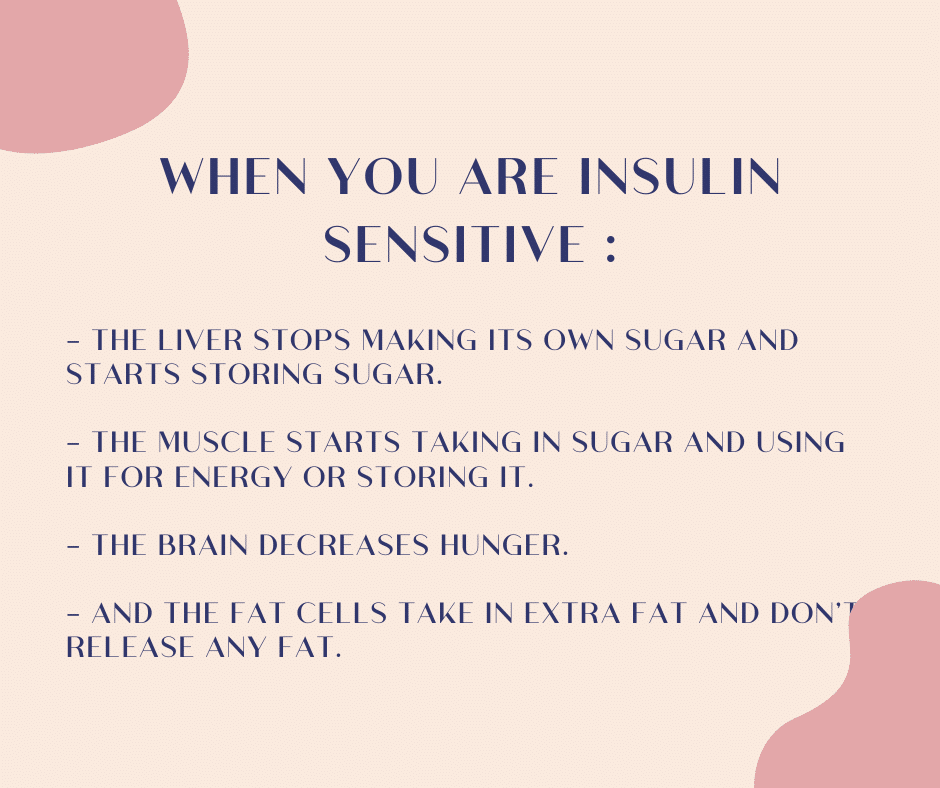 This is a great metabolic healthy system.

If you want to gain muscle:

Insulin has to be the most anabolic hormone in the body – this is the hormone that allows you to get protein, sugar and fats into the cells to act as the building blocks for muscle.
With no insulin at all you become less muscular (yes you’ll become less fat too with zero insulin, but you will also start wasting away muscle, so you want some insulin just not too much).

You want some insulin so it is sensitive, you want the body tissues sensitive to insulin and you don’t want too much of it.

At the level of the liver:

The liver does not get that message and despite the fact that you have eaten cake and you should be storing the cake away, instead the liver never gets the signal that you’ve eaten glucose so it continues to make its own.
This is why you can have very high levels of fasting glucose to people that are becoming insulin resistant.
If you notice your fasting blood glucose levels (readings done first thing in the morning) are creeping up into the 6mmol/L’s (millimoles per litre) and then into the 7’s, then 8’s – this is a warning that you are becoming insulin resistant at the level of the liver.

When the liver has all the glucose that you ate, plus what it is making – it begins to form all that extra sugar into fat and this is why people who are insulin resistant at the level of the liver will often have high triglycerides (blood fats) and high glucose levels.

At the level of the muscle:

The muscle will not take in the glucose, when insulin resistant at the level of the muscle all of a sudden you have high glucose levels – because the glucose is not getting into the muscle and used as energy. Instead they sit out in the blood.

*This is another indication that high fasting sugar levels or post eating levels shows you are having a hard time getting sugar that you are eating into the muscles.

At the level of the brain:

At the level of the fat cell:

You can also measure this on a glucose measuring unit by having a cake and measuring your bloods when you’re about to eat it, then 30, 60, 90, 120 minutes after you’ve eaten it.

If insulin sensitive : blood sugars will go up moderately to 6 or 7, back down to fasting levels in about 60-90 minutes.

If insulin resistant at the level of the liver you’ll have high blood sugar levels spike very quickly and you can go above 10mmol/L because your liver is insulin resistant and it’s not only taken in the sugar of the cake, but you are breaking down glycogens (which is increasing blood sugar) and making new sugar, because the body doesn’t get the signal that you actually just ate sugar.
Now you have this extra sugar compounding effect.

If the muscle is sensitive and yet the liver is resistant, pretty quickly the blood sugar should actually fall fast because the muscle will soak up all that sugar like a sponge.
But if the muscle is also resistant you see that high blood sugar levels stay elevated and slowly come down over time after 2 hours, still higher – and this will tell you that you are resistant at the level of the liver and the muscle.

Fat cells are the last to become resistant usually. 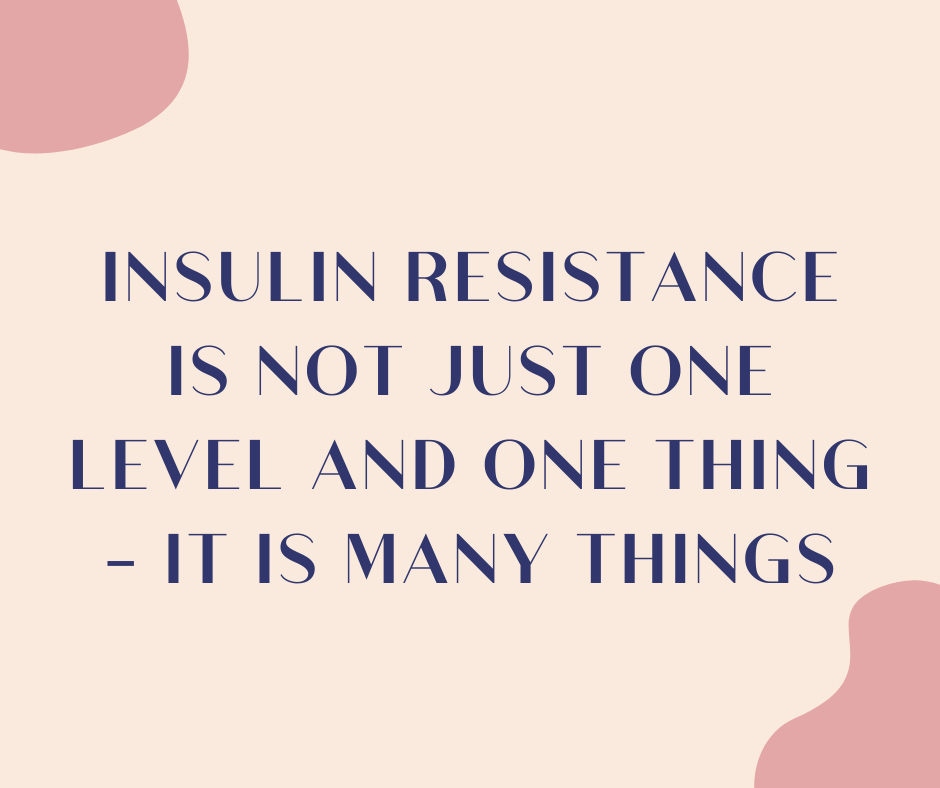 To keep the muscle:

Insulin at the level of the muscle – insulin reacts with the muscle and then increases glucose receptors on the muscle cell. So then the muscle can then take in glucose.

When you become insulin resistant – insulin receptors on the muscle don’t get the insulin signals, which don’t cause the internal changes in the cell to increase glucose receptors – therefore the body and muscles do not get that sugar coming into the body.

However movement – walking especially but any kind movement or exercise increases glucose receptors without the need for insulin.

“When the liver and or muscle are resistant to insulin the best thing you can do is move more.”

By doing this you can cause the metabolic changes you want to have in the muscle without needing insulin, which takes the burden off the insulin mechanism to some degree and can begin to restore some of the sensitivity back to the body as a whole.
Because the longer glucose is floating around the body with these high blood fats the more damage is done and then you get into this negative spiral of insulin resistance, which then progresses eventually to diabetes.

Walking you can do all day everyday and get in 10-20K steps per day, all of this will do wonderful things to sensitize the muscles to insulin again or at least to cause the body to use glucose that is being over produced by an insensitive liver.

Don’t think that to reduce insulin exposure is to not eat – period! (full starvation)

If you are insulin sensitive in the brain – it’s good you are not always hungry, you can fast easily due to not being a hungry person.
If you are a person that is insulin resistant in the level of the brain you will struggle to do this due to the hunger you have all the time.

You need to understand:

That’s when overweight people are eating like they are starving because the metabolism is in a place where it is not getting the food.

The problem is going too low carbohydrate that can stimulate cortisol it will have a stressful impact on the body and with cortisol, where insulin sends the signal food is here you have extra cortisol sends the signal of ‘watch out, hide, be careful’ and when that happens and your cells are not letting anything in.

When cortisol is around for too long – it essentially causes insulin resistance – cortisol is like the boy who cried wolf.
The cortisol is telling your cells something is wrong , so cells will not open, muscle cells won’t allow nutrients in!

This is the problem with telling some people to go low carb.

Important note: Decrease calories enough to get the body to resensitize to insulin to get a more normal metabolic rate.

So long as you don’t have too many calories this will be fine.

KNOW THIS : If you reduce carbs and they are still super hungry and having cravings may mean you are not lowering cortisol may need to focus more on mindfulness – walking. 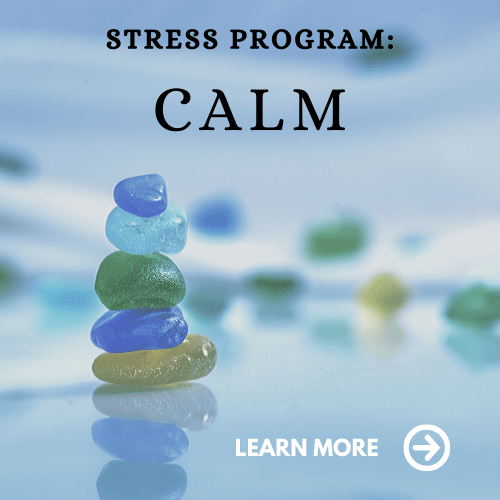